Taxibus is a professional taxicab company providing everyday taxi cab service in Perth, WA. Our hassle-free taxi services for Perth customers include trips to and from Perth Airport and reliable taxi services for a business trip or special events and attractions. We provide guaranteed pre-booked transport options like taxi cab service, maxi taxi service, taxi with baby booster seats, and airport service provider for up to 26 passengers for sightseeing trips and tours.

Taxibus’ fleet of taxis is driven by an expert professional driver team that is friendly and polite and goes the extra mile to please our passengers. Our taxi drivers adhere to the strictest safety guidelines and strive to maintain the highest levels of customer service and satisfaction. No wonder we are often rated as a top authorized taxi operator in Perth and we are proud to be a favourite taxi service offering peace of mind to Perth residents.

Taxibus owns, leases, and manages a lot of taxi cabs to accommodate passengers for different family occasions and wedding trips. Our sedans can take up to four passengers while our minivans and vans have space for 8, 10, or 15 people. Our 10 or 13-seater maxi cab can be used for group travel from Western Australia’s suburbs to Perth city views, city centres, and city beaches. We also provide premium taxi services, maxi taxi services, wheelchair accessible vehicles, wedding taxi services, and Perth Airport to city suburbs transport services at the standard taxi rate. 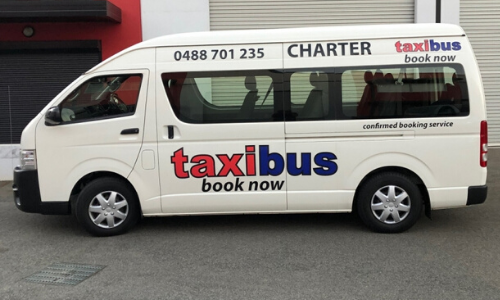 Using advance online taxi booking, you can now avail of Taxibus’ services like 24-hour taxi service and add options like baby capsules or overhead luggage racks. Our professional Perth taxi drivers are always on standby to take you anywhere in Perth or its suburbs at any time of the day or night. We also provide Perth International airport transfers and taxi cab services for Australian businesses who need efficient corporate transfer services.

Taxibus offers fixed fares based on our vehicle types and pick-up locations. We do not charge extra fees for luggage or travel time. With our punctual taxi cab service, you can trust that we will be waiting to take you wherever you need to go in Western Australia!

The friendly customer service team at Taxibus is just a phone call away. Contact us today for taxi services in Perth. Need our taxis to arrive at your pre-arranged location, yes we will be there!

The taxi driver was on time and friendly. Enough space for 7-8 people and many suitcases! Fair price 🙂 (Scarborough to Perth Airport)
- Katharina Seidel
Click to Book

Our experienced and polite professional drivers understand the needs of passengers and stay committed to the safety and comfort of the passengers. There are solid reasons for being Western Australia’s leading professional taxi fleet.

At Taxibus, all bookings are accepted online and Perth taxi services are provided throughout the year, even on public holidays. Our team’s safety measures and standards are on par with the government norms and the safety of passengers is assured.

Taxibus professional taxi drivers are checked for criminal and traffic history checks to ensure the safety concerns of the passengers. Whether you want to travel to one destination or multiple locations, we make your trip convenient with our taxi fleet. We are the taxi Perth relies on and our services are extended to domestic airport transfers, Swan Valley tours, and business Trips.

Our maxi taxi Perth service is a high-demand service in Perth. So we recommend pre-booking for a maxi taxi during business hours with your destination address. Whether you have a huge family or big friend circles, we help you to reach your destination within the stipulated journey time.

If you are looking for reliable taxi services in Perth, book Taxibus.

Taxibus offers an on-demand taxi booking service in Perth. Our online taxi booking service can be accessed any time and we promise to pick you up anywhere in Perth. We are now making it easier for Perth residents to book a taxi ride. Simply register on the Taxibus site and enter your pickup location, destination, arrival time, and date. Book taxi services in Perth from Taxibus today!

Our taxis are available for occasions where you need to comfortably seat more than 10 guests without a hefty price tag. We have taxis of all sizes with seating capacities of up to 26 passengers. Our taxi services are frequently booked and used by Perth residents. Book your taxi travel with Taxibus today to get the best wedding, tour, or vacation experience for your guests.

Baby capsules, baby and child seats are available for travellers who need to take a Perth taxi with children for travelling within the city or to Perth International Airport. Our trained drivers have experience in managing young and elderly passengers alike and we usually have room to spare on our fleet of taxis. You can bring your booster seat or rent one from us!

Taxibus is a new all-inclusive, luxury shuttle service in the Perth area with a variety of transport options to fulfil your personal, leisure, or business needs. With Taxibus, you don’t have to worry about packing up your surfboard on top of everything else when it’s time for that next big adventure! Taxibus services will make sure you arrive at the airport safely and sound with plenty of room leftover in your carry-on bag.

You can take your furry friends to the vets, groomers or explore new parks with a pet-friendly vehicle from Taxibus. You don’t have to worry about leaving them home and your kids don’t have to feel guilty. Taxibus understands how important pets are to their owners and we make every effort to make your pets feel comfortable during the long and tiring journeys on the route. Book pet-friendly taxi services in Perth from Taxibus today!

Taxibus provides a safe way for you to travel with your bags and not have the worry of lugging them around. Taxibus provides an easy way to keep all your luggage secure as you explore the busy city that is Perth. We offer a secure, convenient, and reliable service to you when you’re on the go in Perth! With Taxibus, you will never be left wondering where your bag is. We can even transfer the luggage to the airport well ahead of your flight times.

Travelling by taxi just got safer! At Taxibus, we have comprehensive or third-party damage insurance for all the taxis. We provide maximum insurance security needed so you can travel without worrying that your ride will be safe and sound.

You get professional and experienced drivers for your vacations, events,, and everyday travel across Perth. Taxibus, Perth’s taxi service, has reliable and trustworthy drivers for your every need. Call us today to book a ride!

Taxibus has airport arrival pick-ups for Perth City. We pick up and drop the passengers from international airports, domestic airports and any part of the city and its surrounding area. Maxi taxi Perth services, baby capsule supply, are available at the current taxi fare. Book a ride today.

“Taxi driver was on time and really friendly. Enough space for 7-8 people and many suitcases! Fair price :-)”

Taxibus is the local taxi service Perth trusts. We have a fleet of taxi cabs to help in the navigation of Perth residents to the main city centre, suburb to suburb, and for business trips and vacations.

Greater Perth is home to 2,039,000 people of Western Australia as per the 2018 stat. Around 1.1 million people commute to work in Western Australia. The highest employment sector is Health care and social assistance with 140,400 people with professionals and scientific services in the next two ranks.

Perth had its first colonisation at least 38000 years ago. The first European settlement was observed in 1697. Later it became the city of Perth in 1856. Perth started to develop into a great city in 1900. The Perth Metropolitan area was developed for administrative reasons and brought 31 local governments under its control. Perth is divided into North Perth and South Perth by the Swan River. It is the fourth most populous city in Australia. Education is compulsory for children between six and seventeen years.

Greater Perth comprises 250+ suburbs and 31 local governments and is bordered by Two Rocks, SIngleton, and the Lakes. The most important areas of Greater Perth include Armadale, Midland, Fremantle, Alkimos, Yanchep, Joondalup, and Rockingham. They were initially distinct settlements and later brought under the wider metropolitan area.

Perth’s north coastal hamlets Alkimos and Yanchep are developing as the high-density suburbs of the northern part of the city.

Northern Greater Perth extends from Perth to Two Rocks along the coastal line. Northern cities Kalamunda, Swan, Shire of Mundaring, Joondalup, and Wanneroo are building up as residential communities with benefits to Perth.

Perth is well connected by roads and railway lines across Greater Perth.

Perth Railway Station is the largest Transperth renetwork that serves as an interchange between Perth and its neighbourhoods. The highways are easily navigable and are well connected to urban and rural areas.

Central Area Transit (CAT) bus routes are available along Transperth as free to all users. It also has five main lines, with 70 stations and bus stops in between.

Don’t miss any of these bars on the go from Two Rocks to Perth. All pubs are open until 10 PM. The top bars are:

Nothing like comfort food can warm your soul and body up. Northern Perth has world-class food in its suburbs to suit international taste buds. Enjoy the culinary treasures in these famous restaurants.

Staying in the city or countryside doesn’t matter in Greater Perth. You have plenty of options for accommodation, such as:

Greater Perth‘s massive expansion has moved beyond Two Rocks. Stunning beaches, excellent housing schemes with greener energy, and the relaxed lifestyle of the northern suburbs attract people throughout the year.

Some of the wonderful places of Northern Greater Perth are:

Along the coast and amidst the sand and blue water, there are many lookouts to brighten your eyes and cherish your mind. Don’t miss them while using the Freeway parallel to the beach.

Greater Perth has plenty of historical public buildings and sites. Some of the important landmarks are:

This is just a small sip of Western Australian Historical landmarks and history. These landmarks give in-depth knowledge about ancestors and history.

If you live in or around any of these neighborhoods, call TaxiBus at 0488 701 235 or fill out the below form to book a maxi taxicab from a taxi company near you.

How to book a maxi taxi or taxi cab at taxibus?

At taxibus, you can book a maxi taxi or taxi cab online on our website.

Our taxi booking service is quick and stress-free. Book your taxi in a matter of minutes on our fast and easy-to-use online service.

Do you provide pick-up and drop-out services from Domestic and International Airports?

Taxibus provides quality taxi cab and maxi taxi service from domestic and international airports of Perth. Our reliable taxi services are available 24×7 and we don’t charge extra for the waiting time if your flight is late.

Do you have wheelchair-accessible maxi taxi Perth services?

Yes, Taxibus has wheelchair accessible taxi cabs for all your travel needs in the Greater Perth region. We also have taxis with baby seats and large vans to accommodate up to 26 passengers.

What cards do you accept for payment?

What are your operating hours?

Taxibus provides round-the-clock taxi services for Perth Taxi needs. We are available 24/7, and 365 days a week. Upon booking our taxi cab or maxi taxi, we will provide our best service.